Today I’m choosing the film The Descent. Directed by Neil Marshall (who also gave us Dog Soldiers), this one has an all-female cast of strong and (mostly) likeable characters.

It follows a bunch of six women who go caving in an unexplored system and find themselves being hunted by some pretty scary creatures.

There’s lots of blood and gore and some extremely tight spots, which will get the heart racing if you’re in any way claustrophobic. In fact, it’s the claustrophobic nature of the film which makes it work so well.

The women are relatable, in that they all have daft banter and aren’t afraid to take the piss out of each other, as friends do, and there’s no worrying about makeup and hair and nails here.

There’s some underlying aggravation within the group, between two of the characters to be precise (I won’t say what that aggravation is, in case you haven’t seen the film). It’s an animosity which threatens to bubble to the surface and divide the group. But, ultimately, we see the two women rising above their differences and working together.

The Descent remains one of my favourite horror films. 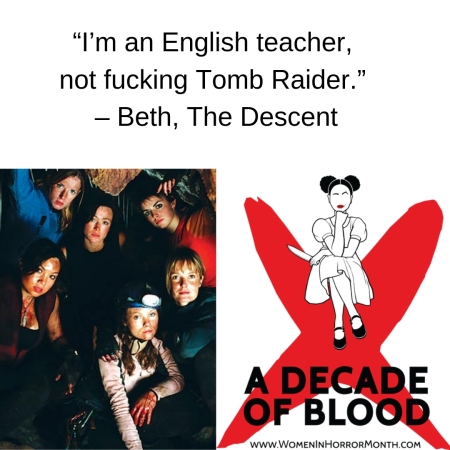