“You see, the strangeness of my case is that now I no longer fear the invisible, I’m terrified by reality.” ― Jean Lorrain

Last year I set a Goodreads Challenge to read 20 books. In the end I managed to cram in 27 (check me out!) This year I’ve set a target of 30, just to push myself, see if I can go that bit further.

So, I was curious, how many books do you manage to read each year? And do you stick to one genre? Or even one author if you find someone’s work you love?

I tend to stick with horror, or anything that creeps over the threshold of horror/supernatural. I try not to be too obsessive about certain authors – though if I found out there’s a book by John Ajvide Lindqvist or Joe Hill that I haven’t yet read, I’d be all over it!

I do, however, want to discover brand new names in the horror genre, or hidden gems that aren’t household names but really should be – so if you’ve got any suggestions please fire away.

At the moment it feels like I’ve got an obsession with Stephen King – which isn’t the case. Honest. I’m reading Bazaar of Bad Dreams and The Shining. I don’t usually tandem read, but Bazaar of Bad Dreams is an anthology of short stories that I keep dipping in and out of, and I bought a copy of The Shining last year while visiting The Stanley Hotel in Colorado (King’s inspiration for The Overlook Hotel)…and I kind of want to read it while the place is still fresh in my head. In my ‘to read’ pile is King’s book On Writing too (I read it some years back, but feel the need to revisit it). After I’m done with those three books, I swear I’ll step away from King till at least 2017!

Anyway, since I love reading and sharing my finds, I thought I’d share my top 5 reads from 2015 – which are a bit of a mixed bag! In ascending order they were:

5. The Long Lost by Ramsey Campbell

‘During a weekend in the country, David and Joelle Owain explore an abandoned village – and discover that its last living inhabitant is distantly related to David. Lacking other family, the young couple embrace Gwendolen, and soon the independent old woman has set up housekeeping near their home. Gwendolen keeps a watchful – perhaps too watchful – eye on the Owains. Joelle feels that Gwendolen is judging them, their friends, and their business associates.’

I’m a massive fan of horror that’s geared towards the darker side of human nature, and that’s exactly what Campbell created in The Long Lost. I loved the interaction between all the characters and Campbell’s dialogue is an absolute joy to read. As are his descriptions! I found myself reading certain passages more than once because they were so wonderfully done.

The Long Lost is very character driven, so if it’s action you want then this might not be for you.

4. The Woman in Black by Susan Hill

‘Arthur Kipps, a junior solicitor, is summoned to attend the funeral of Mrs Alice Drablow, the sole inhabitant of Eel Marsh House, unaware of the tragic secrets which lie hidden behind the shuttered windows. The house stands at the end of a causeway, wreathed in fog and mystery, but it is not until he glimpses a wasted young woman, dressed all in black, at the funeral, that a creeping sense of unease begins to take hold, a feeling deepened by the reluctance of the locals to talk of the woman in black – and her terrible purpose.’

As is usually the case, this book is much better than its film adaptation. That’s not to say the film was bad in any way, it’s just that Hill has a way with words that can’t be outdone by onscreen interpretation. She created the perfect gothic horror, conveying terror through the brooding weather and isolation of the location. There was an overall massive feeling of claustrophobia within Eel Marsh House which taps into more than just one of Freud’s ten uncanny.

The Woman in Black was a short, quick read that I’d recommend to anyone who likes an old fashioned ghost story.

‘Abner Marsh has had his dearest wish come true – he has built the Fevre Dream, the finest steamship ever to sail the Mississippi. Abner hopes to race the boat some day, but his partner is making it hard for him to realise his ambition.

Joshua York put up the money for the Fevre Dream, but now rumours have started about the company he keeps, his odd eating habits and strange hours. As the Dream sails the great river, it leaves in its wake one too many dark tales, until Abner is forced to face down the man who helped to make his dreams become reality.’

Wow, just flipping wow! This is by far the best vampire book I have ever read – some claim, huh? I love Martin’s writing and imagination though, he is without doubt a master storyteller! He breathes so much life and description into his work that you really feel like you’re living within the pages.

Fevre Dream has a brilliant plot, excellent characters and a great setting (Louisiana). Even if you don’t tend to read vampire fiction, I’d say give this a whirl. I can’t rate it highly enough.

‘After a car crash, writer Paul Sheldon is saved by his number one fan, Annie Wilkes. She brings him home, splints his mangled legs, and all he has to do in return is write a very special book, one all about her favourite character. Because if he doesn’t, if he is bad, she will be cross – very cross.’

I know, I know…King again! But it’s easy to see from this book why he’s so successful in the horror genre. Misery is brutal and horrific and just plain old cockadoodie scary! It’s an absolute masterpiece full of dark humour, excellent prose and two main characters that were exceptionally portrayed.

I totally got a sense of Paul Sheldon’s suffering, pain and torment to the point I was actually cringing while reading some parts. And Annie Wilkes, yikes! What can I say? What a dirty birdie she was! This is undoubtedly one of those books that will stay with me forever.

1. The Haunting of Hill House by Shirley Jackson

‘Four seekers have arrived at the rambling old pile known as Hill House: Dr. Montague, an occult scholar looking for solid evidence of psychic phenomena; Theodora, his lovely assistant; Luke, the future inheritor of the estate; and Eleanor, a friendless, fragile young woman with a dark past. As they begin to cope with horrifying occurrences beyond their control or understanding, they cannot possibly know what lies ahead. For Hill House is gathering its powers – and soon it will choose one of them to make its own.’

Oh man, so much packed into such a short book. This is a classic haunted house story, and perhaps I was always going to love it because I was obsessed with the black and white movie as a kid – but, of course, the book kicked the crap out of the film. Jackson’s execution of Hill House was exceptional, the way she anthropomorphised it, and the rapport she created between the four main characters was highly entertaining.

Eleanor was an emotionally unstable, complex woman and her inner dialogue really brought her to life and made her a likeable protagonist, despite her flaws. Theodora and Luke made up two vital points of an unfolding love triangle, which was so subtly done it was brilliant. And Dr Montague provided all of the thought-provoking facts about Hill House itself.

I loved Jackson’s sense of humour, which was laced into both narrative and dialogue. The Haunting of Hill House is a definite favourite of mine.

Oh and, I couldn’t resist, here’s a pic of me fan-girling on the staircase of The Stanley Hotel… 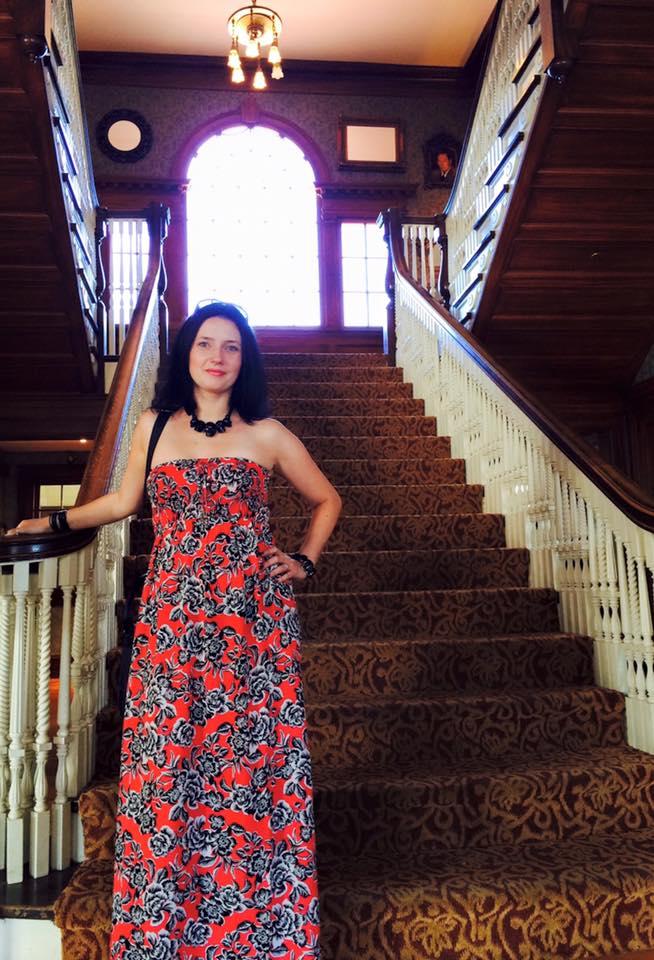 I heart Stephen King. There. I said it!