Good tidings and all that business, I hope you all had a restfully/eventfully/joyously/indulgently festive December!

I must apologise that you haven’t heard from me in a while, but I am still here. And I haven’t forgotten the last three instalments of Freud’s uncanny – they’re still to come (silence, telepathy and death). The truth of the matter is I’ve been focusing 100% on getting Emergence ready to be copy-edited. And I managed to make that happen just in time for Christmas. Phew! Here’s a pic of it in its pristine, yet to be red-penned, glory: 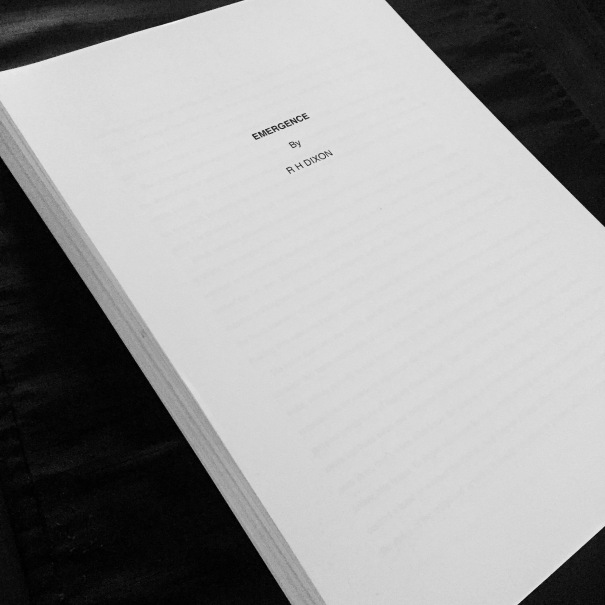 Perhaps you need a little refresher on what it’s all about though?

Ultimately it’s a tale of tragedy and redemption. Widower John Gimmerick, a deeply troubled man in his late-thirties, must face up to the horrors of his past in order to overcome an evil that’s trying to take his young daughter, Seren, away.

Emergence’s main setting is my childhood hometown Horden, an ex-colliery village on the northeast coast of England. These days it’s a struggling village in desperate need of regeneration and I felt it deserved a shout-out – even in the form of dark fiction. I hope I’ve done it some sort of justice. Horden is what it is.

I was initially inspired by ghost stories told to me by two retired nurses who, during the 1960/70s, worked at Thorpe Maternity Hospital (which was located in Horden’s neighbouring village of Little Thorpe). From there I began to delve deep, and deeper still, asking myself what presence might linger in a maternity hospital, if any. And that’s when Emergence began to emerge.

Thorpe Hospital itself was built in the late 1800s and was originally a hospital for infectious diseases, known then, locally, as Fever Hospital. It eventually turned into a maternity hospital around 1949 and remained so until the late-1980s. It then stood for a while longer and went on to be demolished in the 1990s. So with a century’s worth of death, suffering and birth all under its roof, and me being a writer, a horror one at that, I’ve felt a strong inclination to incorporate Thorpe Hospital into a full-length piece of fiction for some time now. As well as the fact I have a personal connection with the place: I was born there.

I hope to have a front cover and release date for you soon…as well as my thoughts on Freud’s ‘silence’, of course! Oh and I have a brand-spanky-new project up my sleeve, which I’m jump-around-excited about. More on that later though.