“Imagination, of course, can open any door – turn the key and let terror walk right in.” – Truman Capote

Anthropomorphism: The attribution of human characteristics or behaviour to a god, animal or object.

Anthropomorphism is the human need to identify with non-human things as similar counterparts, so we might relate to them better. It’s making things ‘look’ or ‘behave’ in a human way, things which aren’t human. For instance, we often anthropomorphise our pets by giving them human names and we expect that they’ll react the same way we do in certain situations.

Say Barney the dog steals a steak from the kitchen counter, after wolfing it down he might then slope off to his beanbag in the corner and appear to look sorry – we associate his wide-eyed look with that of an apology because we imagine he has the capacity to feel remorseful. But we’re only kidding ourselves, Barney’s not sorry at all. Not in the least bit. That steak was worth the ticking off he’s about to receive, and he couldn’t give two shiny shits that you’ve now got to make do with a microwave lasagne. As far as he’s concerned he’s wilier (and fuller) than you right now, which to him can only be a good thing. Dogs don’t do remorse.

And yet we can’t help but be fooled by those puppy dog eyes. Every time!

The fact is we’re obsessed with anthropomorphising animals. Even in cartoons. Bugs Bunny, Daffy Duck, Mickey Mouse – they’re all animals who stand upright and behave in human-like ways. We just can’t help ourselves. But aside from animals, we apply anthropomorphism to non-living objects too.

It’s not unusual to imagine that an electrical item that’s performing a task is ‘behaving’ or ‘thinking’ in a human way, like if your laptop is running like a bag of spanners while you’re working to a tight deadline, you might think for a fleeting moment that it’s purposefully playing up just to spite you. This is around the time you’ll probably call it a shithead and threaten to throw it out the window, as though it might actually pay attention and stop behaving so obstinately.

From birth we make out faces in most things, it’s natural. We see human-like faces on everyday objects like lampshades, electrical plugs and sockets, house fronts, radios and cars. Car ‘faces’ (headlight eyes and bumper mouth) are even used as advertising techniques to attract people to (and hopefully make them buy) certain types of cars. Small, economical commuter cars are generally happy looking, whereas sports cars often look more shrewd.

Taking things a step further, gods and goddesses throughout the ages, in all different cultures, started out as primal things – love, war, beauty, famine, weather, fertility etc – and were given human-like forms, in both genders, as well as names, so that they could be identified with on a more personal level. These deities, created in the eras of pre modern science, were seen to have strengths and weaknesses just like any man, woman or child. They served to put the universe into some kind of graspable context that we could comprehend and feel happier about, and from these fundamental characters stories were created, fables that had underlying messages of morals and virtue.

There are aspects of anthropomorphism, I find, that cross the border into animism, which I covered last month. Transformers, for example, fall under both categories. These are robots that not only have sentience (relating to animism) but also the ability to transform into human-like shapes. We much prefer Optimus Prime as a two-legged, human-esque autobot than a Kenworth K100, because that way he’s more like us. On a side note, have you noticed how we tend to appoint gender to a robot too? I think Optimus Prime easily fitted into a male stereotype and ‘he’ is much more personifying than ‘it’. And it’s interesting that his role of masculinity was further imbued by him wearing a pair of metal superhero-style underpants, with an undeniable bulge going on beneath the bumper of his front cab. 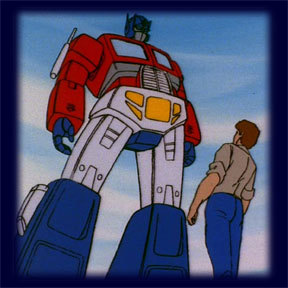 A robot doesn’t need to have a face to serve its purpose, and yet we prefer to give it one anyway – so that we can better identify with it. Take Henry the hoover, for instance, a gimmicky ploy that perhaps made ‘him’ the most recognisable vacuum cleaner in the world. But, sadly for Henry, when your job is to take care of dust bunnnies and cobwebs around the home there’s no need for underpants or a robot dick, those things are reserved for robots who defend the Earth. Henry must make do with a bowler hat and various nose attachments instead.

The Terminator franchise used anthropomorphism too, going as far as to give the machines a layer of ‘skin’ and some ‘hair’ to make them look intrinsically human. Although the most obvious examples of anthropomorphism in fiction keep fetching me to robots, I’m going to go out on a limb and suggest the werewolf/wolf-man as a suitable candidate. So, ok, it’s a man turning into a wolf which doesn’t strictly fit the protocol – but it’s a wolf that walks on its hind legs nonetheless, and in the case of the wolf-man also wears clothes. The wolf in his shape-shifted form has undeniable human qualities, therefore surely has to count.

On a similar train of thought it could be argued that Jeff Goldblum’s fly is in some way connected to anthropomorphism. It’s a human turning into a fly, but at the same time it’s the fly taking over Goldblum’s body. The film definitely anthropomorphises the fly to a level of nightmarish human-grotesque.

For me, personally, anthropomorphism isn’t the scariest or most worrying of Freud’s uncanny, but it certainly deserves a spot on the list because it highlights how weird we are as a species. That we consciously, or not, try to imagine things looking or behaving in the same way as ourselves in an attempt to understand and relate to the world around us.

Anthropomorphism is the pareidolia of seeing faces in the marble of your bathroom tiles while you take a shower. It’s the Amityville house that regards everyone with window ‘eyes’ and sneers from behind a row of porch-glass ‘teeth’. It’s the man in the moon. It’s finding the Mazda RX8 on the motorway more intimidating than the Nissan Micra because it looks more likely to get pissed off. It’s the role reversal of Planet of the Apes. It’s finding faces in the dust motes in your photographs and swearing blind that they’re dead people. And hey, maybe they are! Just maybe. 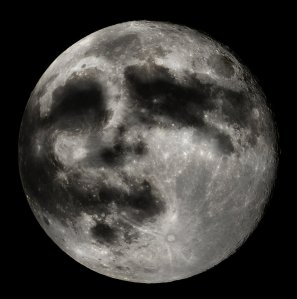