“Which is the true nightmare, the horrific dream that you have in your sleep or the dissatisfied reality that awaits you when you awake?” – Justin Alcala

Repetition: The action of repeating something that has already been said or written; the recurrence of an action or event.

Repetition can be okay for a while, so long as you have the necessary control to change the routine whenever you please. It’s when the control to change is taken away from you that things become tetchy, horrific even, because Freud’s repetition, to me, is about confinement. And there’s nothing that gets the heart beating faster than the feeling of being trapped. And, yes, you can be trapped in a circumstance as well as a tight space.

So it’s no wonder that Groundhog Day springs to mind. Not a horror film, true, but still enough to evoke the sense of horror felt by Bill Murray’s character. What could be worse than waking up every morning to the same shitty day where nothing changes? There’s only so many times you could unsuccessfully try to seduce Andi MacDowell and kill yourself without wanting to, well, kill yourself some more. It could have been a whole lot worse for Murray’s character, granted, but in the end he managed to break the cycle and get out. After repeatedly attempting suicide he finally ups the ante on winning over MacDowell’s, more sanguine, character. The film’s message, as I took it, was that if you’re a cynical douchebag you’re going to get stuck in a rut, so cheer up and move along. I suspect if Groundhog Day had been a horror movie Murray’s character would be waking up to that nerve-grating Sonny & Cher song for the rest of eternity, an unbreakable chain no matter how many times he managed to coax MacDowell’s character into bed. 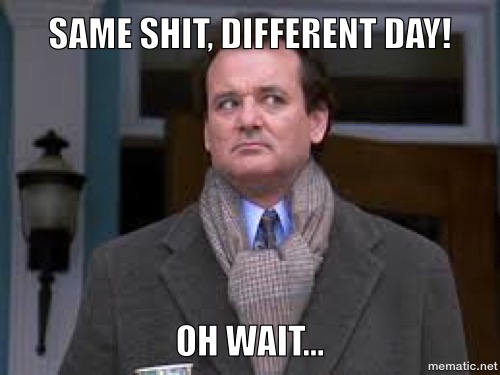 Sometimes I think life can emulate Groundhog Day (without Punxsutawney Phil of course) in the form of the old 9-5 office routine. You do it because you have to, not because you want to. Hell, there’s a million and one other things you’d rather be doing, like visiting the grandfolks or cleaning the bathroom. But it’s a catch twenty-two situation because we’re slaves to the wage. Therefore it’s no surprise that people dream of winning the lottery. A jackpot ticket would be an escape route from the often soul-destroying restraints of day-to-day working life that can sometimes turn us into cynical douchebags.

Some of us might like to think we’re creatures of habit, but really repetition wears thin. It can feel safe for a while, but too much of the same thing can make us go bat-shit crazy. Like pop songs on the radio. What may start out as a harmless enough catchy tune can soon have us fighting thoughts of mass homicide after hearing it on the radio for the millionth time. Well okay maybe not that extreme, but you get the point. Enough already!

When Titanic first came out, I was astounded that people I knew went to the cinema multiple times to see it. Seriously. I remember thinking that surely there’s only so much swooning you can do over Leonardo Di Caprio’s floppy blonde hair or, indeed, Kate Winslet’s nudey scene. And I don’t doubt it to this day. I’m convinced that even the most die-hard of Titanic fans must think after the tenth, or even hundredth, time of watching it, Oh budge up, bitch, he’s drowning. How much space do you need?

Repetition also brings to mind machines. Nobody wants to feel like a robot because, ultimately, robots are controlled by somebody else, and if you feel like you’re running in drone-mode it gives the sense of having no freewill – that key component for being human. There are plenty of examples of unorthodox part-human, part-machine personal crises in sci-fi, but applying it more specifically to horror – if waking up as Robocop isn’t terrifying enough – this drone-like manner could be likened to zombies.

I mean, what exactly do zombies do?

They lurch about the place looking for people to groan at and nibble on. That’s it. They have no conscience or emotion and definitely no sense of freewill. The lights are on but there’s no one home. Robots are at least useful, whereas zombies serve no purpose whatsoever. Their existence is sickeningly mundane, and I suspect this is the main reason why most post-apocalyptic survivors in zombie movies try not to get bitten. Okay, so not wanting to wind up eating your friends and family factors into it somewhere, but mostly it’s because you don’t want to turn into a mindless drone. We wouldn’t be bothered half as much if Kiefer Sutherland’s David or Brad Pitt’s Louis tore a strip out of us, but a zombie? – give your head a shake! No one wants to be confined to an existence of that unchangeable bullshit – much less eat a diet of brains and goo, but that’s by the by.

In fact, no, forget about Brad Pitt’s Louis – what the hell was I thinking? Anne Rice’s vampires were a pretty damn melancholy bunch because of the monotony of their everlasting lives! There’s only so many times you can visit everywhere in the world over the span of a thousand-plus years before becoming insanely jaded. No wonder they all avoid each other and seek solitude. For a moment I was blindsided by the promise of eternal youth and vampires in flouncy blouses and ruffles, shame on me. So I take it back. The life of a vampire would eventually be just as tedious as that of a zombie – albeit a little bit sexier. The only way the life of a Rice vampire would become more appealing to me is if she introduced them to outer space. Who better to send up there? They’d have all the time in the world to discover the meaning of life and if they still wound up disappointed it’s nothing a self-driven stake through the heart wouldn’t solve, them having the capacity for freewill and all that. 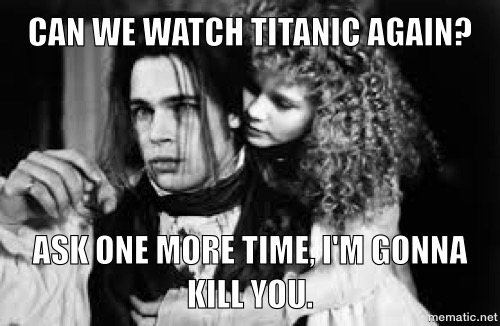 Repetition is also the drip-drip-drip of the tap. The rat-tat-tat of the tree bough against the window. The caw-caw-caw of the crow. It’s all those repetitive noises that grate on your nerves and play on your mind like some sort of Chinese water torture.

But what’s so foreboding about a dripping bath tap? Nothing I suppose. But put it into a setting of uncertainty and already frayed nerves and actually that repetitively dripping tap is very tantamount to creating tension in a horror film or book. If the lights have gone out and our protagonist is stumbling through the dark trying to find the trip switch, a background noise is somehow more unnerving to them than silence. That dripping makes them imagine stuff. Perhaps some higher, malign force is controlling the water pipes, deliberately trying to put the shits up our protagonist to distract them from whatever’s hiding in the shadows ready to jump out with a meat cleaver.

And let’s not forget déjà vu. Something bad is going to happen or I’ve been here before are the usual reactions to those feelings of reliving an exact moment in time. I tend to associate déjà vu with negativity – it’s a troubling sensation because it would suggest I’m not in control of my own destiny and that something else is calling the shots. I’m not comfortable with that. And if I am confined to a pre-packaged life that’s stuck on repeat, then who the hell was the packer and when do I get my six-figure book deal?

For some people repetition can be comforting, I get that. But only for a while. Eventually any established routine will wear thin. It’s supposed to. It’s human nature to get bored. Repetition undoubtedly shares its boundaries with claustrophobia and monotony (and its toes are sticking way over the chalk lines of both). Freud was spot on when he put it up there on his list of uncanny.

It’s the person who’s lost in the woods, shit scared, walking for miles and covering so much ground that they have blisters upon blisters on their heels, but in the end they wind up right back where they started. It’s the never-ending night-time when all you need is some sunshine to banish the demons. It’s the Russian roulette of a genetic defect. It’s the cracks in the pavement for the person with OCD. And it’s the horror movie sequel, because the evil never really died at the end of the first film. But we damn well knew that already, didn’t we?